apparently Devon can tell the future, because he was obvisouly pissed that I completely destroyed him in darts after this picture was taken.

mangina at his best

why not start off the new year with Satan?

So another year has passed us by, leaving us older and wiser.  In 2005 I learned just how powerful the internet can be if used right, or wrong for that matter.  Also just how addicting the internet can be with all this blogging, foruming, and just general fucking around.  Another lesson learned: That some people are just down right ignorant and nothing you can say or do would ever be able to even shed a glimpse of light onto “what’s really going on.”  But hey, now I know what to look for.  Insurance companies are scam artists, along with Chef Tony and his goddamn miracle blade series.  2005 also gave us the birth of the best thing that has ever happened to radio: 89.3 The Current  Sound Tribe only played once, but 10K Lakes was beyond words and I will definetly be there in 06.  I didn’t snowboard once in 05, and won’t be too disapointed if it doesn’t happen in 06.

As predicted the summer of 2005 was one of the greatest of all time hands down. 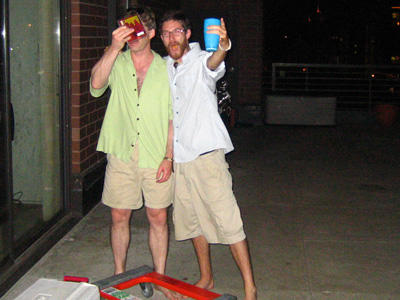 Even though I didn’t go to Canada, I’d say this summer was PANCAKING GREAT!  Hopefully 06 will lend itself to me going to Canada again – I’m not sure about the whole gang, but you never know.